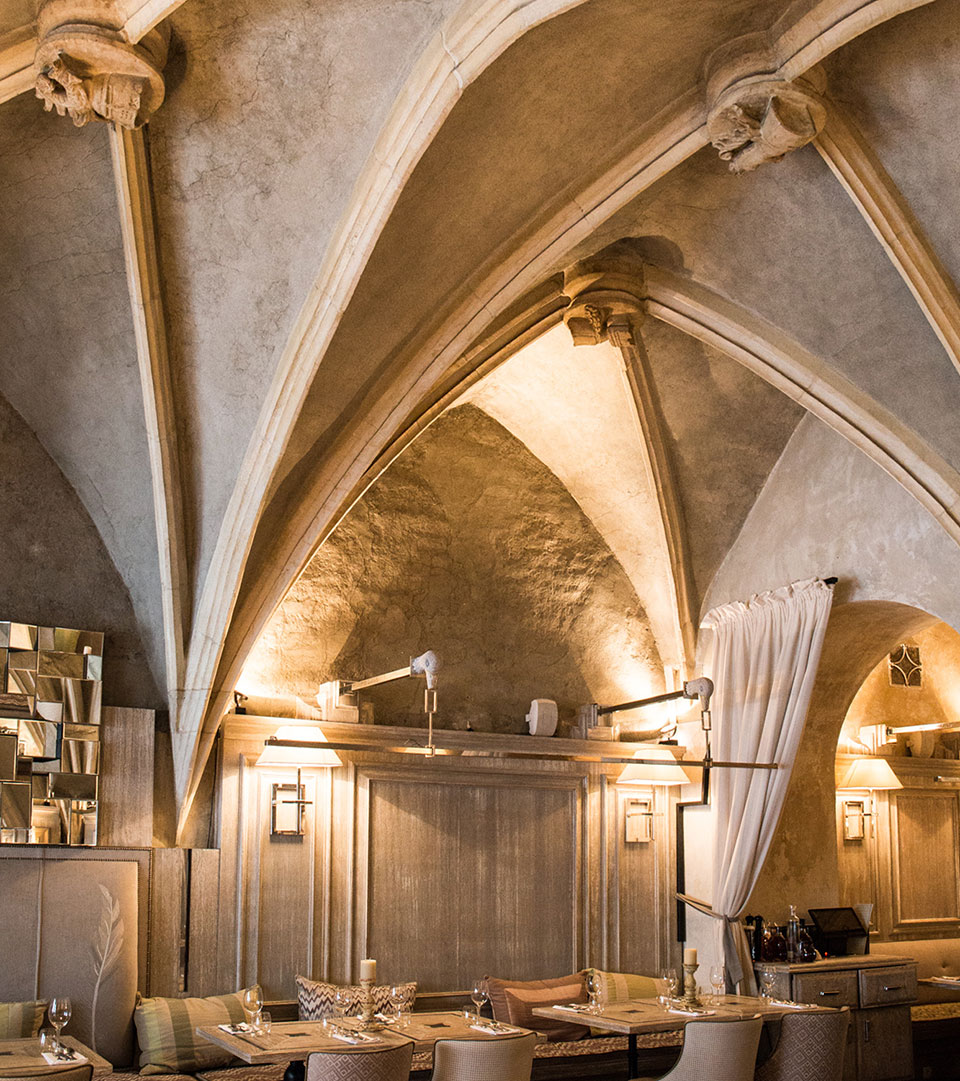 The most important part of the buildings is the Kamienica Hetmańska, located at No. 17 Rynek Główny. It is called the Old Mint and dates from the beginning of the 17th century. It is one of the oldest surviving houses in Kraków today. The original buildings were erected soon after Kraków’s was established in 1257 by Bolesław Wstydliwy. Part of the perimeter walls of the cellars have survived from these times.

The rest of the reconstruction from the second half of the 14th century is a one-storey, vaulted Gothic hall with a very important group of carved window keystones. The remnants of the decoration of the contemporary keystone edifice were also found on the second floor, above the Gothic hall, which clearly shows the scale and the size of the building. Until recently, the Gothic sculptural decoration of the tenement house was linked with the Kraków castellan, Jan of Melsztyn, but the latest publications point to a much more interesting possibility. According to Marek Walczak, the unusual size of the plot on which the No. 17 tenement house was located (between the head office of the village Mayor and the market square), the unusual architectural solutions and unique decoration allow a Medieval city palace associated with the royal authority to be imagined. It is assumed that tenement No. 17, which has always been called the palace, was erected on plots of land confiscated after the suppression of the rebellion of Mayor Albert in 1312. If we accept this hypothesis, then the powerful ‘royal’ tenement house in relation to the neighbouring buildings would play the role of the ruler’s residence during his sojourn in the city, while the vaulted hall on the ground floor would occasionally be the throne room. This seems to be confirmed by the iconographic arrangement, cut into the keystones, where the representations of the jewels and the coats of arms of the territories under the reign of Casimir the Great predominate. The use of tournament helmets with jewels instead of coats of arms is considered by researchers as the symbol of the dignity of the ruler.

Around the middle of the 16th century the tenement house belonged to the Ber family. Kasper Ber (circa 1460-1543), a mining entrepreneur and alchemist, had the royal privilege of minting coins and was the owner of the no. 17 property on the estate. At the turn of the 16th and 17th centuries the building was inhabited by many representatives of the Italian colony, including Cecci, Montelupi and Soderini. From 1673, the tenement was owned by the Branicki family of the Gryf coat of arms. In the 1720s, the tenement house was purchased by the voivode of Sandomierz, Krzysztof Ossoliński. The current name of the Hetmańska tenement house comes from the grandeur of Jan Klemens Branicki, the Kraków castellan and the Grand Crown hetman. After the Kościuszko Insurrection the house was occupied as Prussian and Austrian military quarters and was heavily degraded. In 1815 or 1816, the property was purchased by Teodor Anzelm Dzwonkowski, a traveller and author of a fascinating diary. After the death of Dzwonkowski, the building became the property of his daughter, Józefa Dzwonkowskich Komornickiej and owned by her heirs and remains such to the present day. In 1850, the upper floors were destroyed by fire and the reconstruction of the tenement lasted three years. A major renovation was carried out in 1916, and in the years 1972-1988 a general renovation was carried out, lowering the tenement house by a storey to recreate the appearance of the façade from the time of Hetman Branicki.